Published by 5thgrademagnet on August 22, 2013 | Leave a response

Well, today was Day 2 (178 more to go). Yesterday we began writing down our class rules. I began typing them into Google Docs and in the end shared the document with all the students. One rule the students came up with was No Hats In The Class. Now normally, I’m not too fussy if […]

Published by 5thgrademagnet on August 21, 2013 | Leave a response

So normally a person wouldn’t pair Angry Birds, a sign that reads F.A.I.L (First Attempt in Learning), and school philosophy in a lesson to 5th graders; let alone 5th graders on the 1st day of school. But I did, and I’d say that I’m pretty darn brilliant. F irst A ttempt I n L earning […]

Published by 5thgrademagnet on April 29, 2013 | Leave a response

Earth recycles.   A PSA by Amy

What Would You Do?

Here is a problem for you: Let’s say that you know your friend took money from someone in your classroom. We’re not talking a dollar or two (although that’s not right either), we’re talking like $20. I know, that’s a lot! Maybe that friend is telling you that you better not tell. Maybe your friend […] 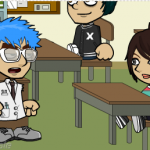 Recently, I have been singing the praises of Go Animate. My students and I love the format. They choose characters add dialog. We have incorporated this into our math. We have started our very own website on fractions. Many students have chosen to explain these concepts via Go Animate. They are so into it. Well, […] 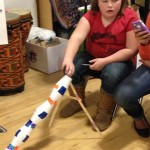 For the past few weeks, students have been working on building ramps for a ‘Marble Roll’. Each ramp had to be 61cm. When the students completed their task, they then conducted an experiment. Each group did time trials, 10 times for each variable. They then averaged out the results to see which variable gave them […] 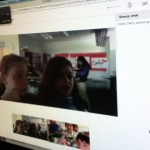 So last week we had our very first Mystery Hangout. A Mystery Skype/Hangout is where 2 classrooms ‘meet’ online and try to figure out where the other one lives. So for this one, we ‘met’ our class on a Wednesday morning. We each took turns asking yes/no questions. We began by asking very broad questions […]

So this week we have been discussing THEME in literature, and how it is different from TOPIC. For example, we read a story from Afghanistan about a village that was afraid of a melon because they thought it was a terrible animal. A boy told them that it was just a delicious melon. We discovered that the […]

Yesterday we celebrated Dr. King and all his accomplishments. One way in which many celebrate was through a Day of Service. This means that some people volunteered their time in order to help their community. Some people helped clean up their neighborhoods, while others worked with some local organizations. What are some of your thoughts […] 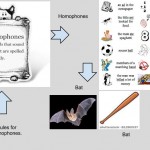 Published by 5thgrademagnet on January 8, 2013 | 3 Responses

One of my students is the Queen of Homophones. In order to help us she created this handy little chart. Thank you Amy!

Powered by WordPress | Hosted by Edublogs | Protected by CloudFlare